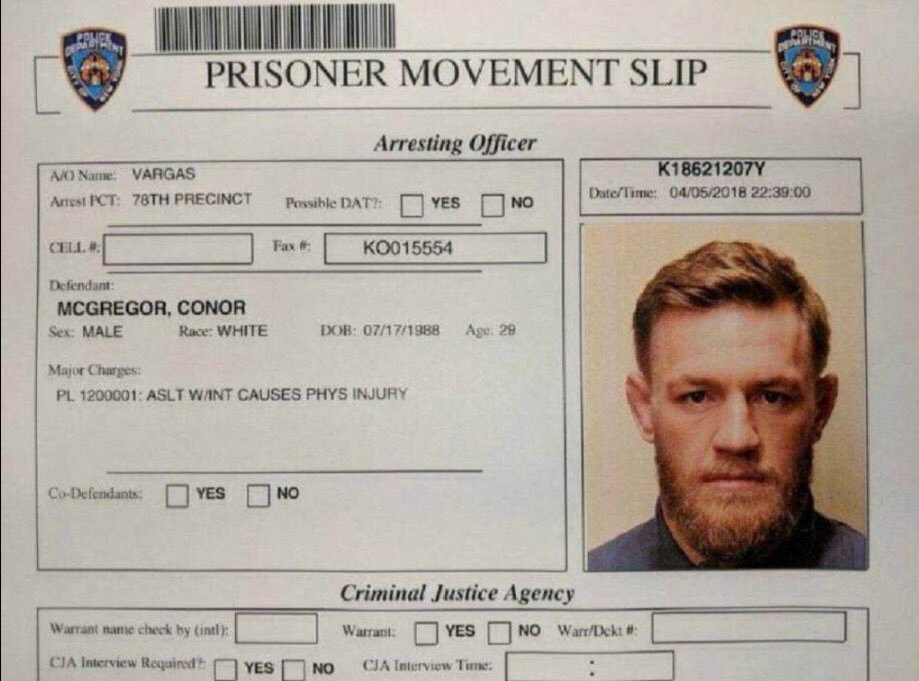 Conor McGregor, the mixed martial arts fighter who famously took on the ever-so-problematic (and NOT a Proof favorite), Floyd Mayweather in the boxing ring in August 2017 has been involved in a bit of a bewildering incident, with not-so-bewildering legal ramifications.

McGregor was at the center of a manhunt on Thursday, April 5, 2018 after actions he took at the Barclay’s Center in Brooklyn. McGregor was at the Center for a press conference about big mixed martial arts event, UFC 223. Note though, he wasn’t set to appear at the press conference, he wasn’t even fighting in the match. So, why was he there? According to reports, he showed up to see UFC lightweight contender Khabib Nurmagodov, with whom he had some beef and who was set to fight that night and clearly scheduled to be there. What was McGregor’s intention? A nice little chat among colleagues? Hmm. Not likely, and in fact that’s going to be an area a judge and jury are going to be quite interested in hearing about as McGregor did way more than talk that night. Instead, he allegedly threw a hand truck through a bus window and tossed a metal barrier and garbage can around the parking lot. His actions caused injury to two other fighters. And then after his outburst, he and his entourage hopped into an SUV and left the scene.

What was it that really set McGregor off? Well, apparently just the day before, UFC President Dana White announced that he was stripping McGregor of his lightweight championship belt and awarding it to the fighter who won UFC 223 on Saturday, April 7th. The fight was set to be between Nurmagodov and Max Holloway. McGregor and Nurmagodov have had a rivalry since 2016, after Nurmagodov called McGregor a chicken (yep!). Nurmagodov also had a run-in with Artem Lobov, a fighter who was part of McGregor’s entourage. So, lots of hard feelings all around.

However, NYPD was none too pleased with McGregor and the fact that he left the scene of the crime. A full on manhunt ensued so what was first deemed a publicity stunt suddenly became even more serious. Thankfully, McGregor turned himself in (thereby saving lots of taxpayer dollars) but NYPD was making nice simply because they didn’t have to continue the manhunt. McGregor was charged with felony criminal mischief and misdemeanor assault, attempted assault, menacing, and reckless endangerment. He was released on $50,000 bail. McGregor’s friend, Cian Cowley, who took part in the melee, was also charged with criminal mischief, assault, and reckless endangerment.

Certainly, it doesn’t help McGregor that his criminal temper tantrum was caught in real time on film by onlookers. I mean, really, what did he think, no one was going to capture it on an iPhone? By now, most of us have seen at least some of the footage–it’s not going to be easy for McGregor to stand up in court and say “not guilty.”

If convicted, McGregor could face more than 11 years in prison. And as for those injured fighters with matches that Saturday? Raymond Borg suffered a corneal abrasion and bruising on his face and Michael Chiesa suffered damage to his face and hand from glass. Note that McGregor has also been accused of punching another man, Jason Ledbetter, in the face multiple times. This behavior led to additional consequences for McGregor as Ledbetter was issued an order of protection. Other people on the bus had minor injuries from the glass that shattered, including UFC Vice President Reed Harris.

McGregor will be back in court on June 14, 2018. Definitely would have been much wiser had he simply stayed home that night.