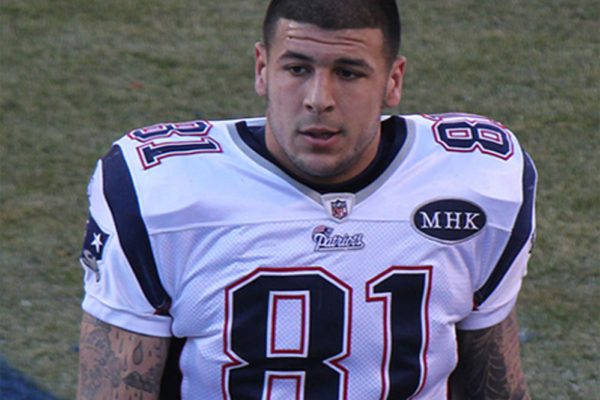 Aaron Hernandez had it all—a $41M contract with the New England Patriots, a beautiful fiancée, a new baby girl, and a large home in Massachusetts. All that came to a crashing end when in June 2013 he was charged with first degree murder of Odin Lloyd, the boyfriend of his fiancée’s sister. Things got worse from there. In 2014 he was indicted for the 2012 murders of Daniel Jorge Correia de Abreu and Safiro Teixeira Furtado. In 2015, he was convicted of the murder of Lloyd and sentenced to life in prison; he was indicted that same year for witness intimidation of Alexander Bradley, Hernandez’ “friend” who was with him the night of the double murder of Abreu and Furtado and allegedly saw what occurred. (This wasn’t just any ole’ witness intimidation. Hernandez is accused of shooting Bradley in an effort to silence him about what he saw that night). The witness intimidation matter is on hold but Hernandez is set to stand trial in 2017 for the double murders. Talk about a fall from grace. Stores today can hardly give away a #81 Patriot jersey.

Along with being known as a great tight end, Hernandez was also well known for his body ink. He was frequently photographed showing it off so it’s somewhat of a just dessert that his tattoos would one day come back to haunt him in a very real way. And that is exactly what is happening now.

In 2013, Hernandez went to a California tattoo parlor and added three tattoos to his collection. All three of the tattoos are on Hernandez’ arm. Each of the three, the prosecution argued in its’ motion, had meaning and served to commemorate the double murder and the witness shooting. The first one is of a revolver with five bullets in the chamber—one bullet is missing. The night of the double murder, five shots were fired into the car in which the decedents were seated. The second tattoo says “God Forgives.” The words are written backwards so they can only properly be read in a mirror. The third tattoo is of semi-automatic gun with smoke coming out of it along with one spent shell casing. This is the type of gun ballistics showed was used in the Bradley shooting. Further, allegedly, one spent shell casing was found on the ground next to Bradley. Assistant District Attorney, Patrick Haggan, the prosecutor handling the Hernandez case argued that these tattoos link him to the crimes and should therefore be admissible.

It should be noted that after Hernandez’ conviction for the murder of Lloyd he hired new attorneys. Currently he has a five member defense team. The most famous? Jose Baez, who is best known as being the lead attorney in the Casey Anthony trial. You remember her—mother of the year, in 2011 was acquitted of murdering her two year old daughter, Caylee. Naturally Baez and the rest of the team is fighting the government at every turn and with no holds barred. They argued that the prosecution’s theory was speculative, called for inference and that the tattoos were not relevant to the case. They further contended that allowing jurors to hear about these tattoos would violate Hernandez’ constitutional right to a fair trial. No win for Baez on this round. The court ruled that all three tattoos are admissible as evidence at trial for the purpose of connecting Hernandez to the killings. Good ruling, your honor but with the current state of the law regarding tattoos as evidence, you may just have created an appealable issue should Hernandez be found guilty. And though it would be interesting to see how a higher court rules on the matter, it won’t make make much difference for Hernandez as he is already serving a life sentence for the Lloyd murder and still has to face those witness intimidation charges.

Last, Hernadez is facing several civil lawsuits stemming from his actions. After paying all of his lawyer fees though, I’m not sure how much of those NFL millions will be left to satisfy any civil judgments. For a better sense of what Hernandez’ lawyers are costing him, check out my video on how much criminal lawyers charge.

The Top 10 Celebrity Divorces of All Time
Previous Post
Are You DEPLORABLE? Here’s How You Can Find Out