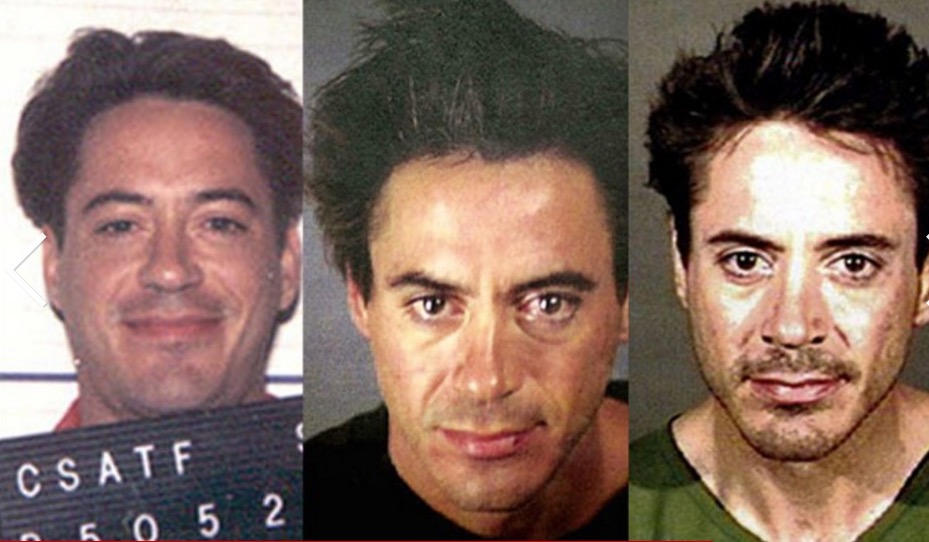 11 Famous People Who Have Gone to Prison

Many think that when celebrities are charged with a crime, they generally get off because they’re rich or because they’re beautiful or because they “know” people. But that is simply not true. Yes, famous people can and do hire the best lawyers that money can buy and that certainly helps their defense but money and fame doesn’t always save a celeb from serving time.   The truth is big names do have trouble with the law and have gone to prison. From brief stints to decades behind bars, here are some famous people who went to prison …

In 1999, Robert Downey Jr, a PROOF favorite, was sentenced to three years in prison for repeatedly violating probation on drug and weapons charges. He was given credit for 200 days of time served but the rest he served at California Substance Abuse Treatment Facility and State Prison in Corcoran, California. Though the name makes it sounds a little light as if it were more treatment based than prison based, the truth is and has Downey made clear, his temporary home in Corcoran was no country club.  But, Downey completed his sentence, got clean, went on to hit it big as Iron Man and in what is likely one of the more important things that has happened to him in his life had his conviction pardoned. For more information on Downey’s pardon, watch this PROOF video.

After a six-week trial, lifestyle guru Martha Stewart was found guilty of felony charges of conspiracy, obstruction of an agency proceeding and making false statements to federal investigators. In July 2004, Stewart was sentenced to a five-month term in a federal correctional facility; she did that stint at Federal Prison Camp in Alderson, W. Va.

In high school, we’re sure Stewart would have been voted Least Likely To Go To Prison so certainly her imprisonment shocked some! We also know that prison wasn’t quite so bad for Stewart who was said to have passed the time there cooking, gardening, making crafts and exercising. Doesn’t sound like life behind bars was all that different for Stewart! Since her release she doesn’t seem to have suffered much either professionally. Busy as she always was–and that’s a good thing!

We all know that O.J. wasn’t convicted of the murders of Ron Goldman and Nicole Simpson; and most of us also know that in a very interesting turn of justice, on October 3, 2008, 13 years after he was acquitted of those murders, Simpson was found guilty of other crimes–ten charges in fact including armed robbery and kidnapping. These charges resulted from an incident in which Simpson lead a group men men who broke into a hotel room at the Palace Station Hotel in Las Vegas with the intent to steal sports memorabilia.

On December 5, 2008, Simpson was sentenced to a minimum of 9 years in prison and a maximum of 33 years for those acts. The Juice is currently serving his sentence in Lovelock Correctional Center in Lovelock, Nevada. He is eligible for parole October 2017. No secret to PROOF readers, prison is where we hope he stays.

T.I. began serving his time at FCC Forrest City, a low-security prison in Arkansas. He was released approximately 9 months later, on December 22, 2009 and from there was moved into a halfway house in Atlanta. The hip-hop artist was released in March 2010. In 2016, T.I. was arrested for drug possession (which violated his probation for the weapons charge) but lucky for him, he was not ordered to do any more time.

Infamous music producer Phil Spector is a famous person in prison. Spector is currently serving his 19 years to life sentence for the second degree murder of Lana Clarkson at the California Health Care Facility, California State Prison in Stockton, California. The “Wall of Sound” creator will be 88 years old before he will be eligible for parole.

Mike Tyson was one of many famous people who went to prison. The boxer was convicted on charges of rape on February 10, 1992. The heavyweight was sentenced to six years in prison followed by four years on probation. Despite his age, the 25-year-old began his stint at the Indiana Youth Center in April 1992. After serving less than three years, he was released in March 1995. Though Tyson’s life has been fraught with headlines and conflict, he has managed to stay out of prison.

After being convicted of three misdemeanor counts of failing to file federal income tax returns, “Passenger 57” actor Wesley Snipes began his three-year federal prison sentence on December 9, 2010 at McKean Federal Correctional Institution, a federal prison in Pennsylvania. Snipes was eventually released on April 2, 2013. Unfortunately, seem as if his career has not taken flight since his release.

Another famous person in prison is Hollywood Madam Heidi Fleiss. She was arrested, tried and convicted back in 1994. Her state conviction was overturned but she was convicted on federal charges of tax evasion in September 1996. She was sentenced to seven years in prison, but only served 20 months at the Federal Correctional Institution, Dublin in California. The personality was released into a halfway house on November 19, 1998 and had to do 370 hours of community service before being released from the halfway house. Since her release in September 1999, Fleiss has been in and out of rehab and got engaged to Dennis Hof, the infamous owner of Nevada’s Moonlite BunnyRanch. Great judgement does not seem to be one of Fleiss’ strong suits!

Before he was Tim “The Tool Man” Taylor on “Home Improvement,” Tim Allen (then known as Tim Allen Dick) was in the joint. The then-25-year-old was found in possession of over 650 grams of Colombian cocaine at the Kalamazoo-Battle Creek International Airport in Michigan. Due to state law, the amount of drugs he was found with (a pound and a half!) could have led to life sentence in prison. But instead, the funny man rolled over on his associates — 21 people in fact. Due to his giving up names, Allen brought his sentence down to three to seven years.  He only served two years and four months. He was paroled on June 12, 1981 in Federal Correctional Institution, Sandstone in Sandstone, Minnesota. And we all know what happened to him after he got out of the big house — he made it big!

Another famous person who went to prison is legendary boxing promoter Don King, who has charged with killing two men 13 years apart. In 1954, King shot a man who was robbing one of his gambling houses. The death was ruled a justifiable homicide. In 1967, King was convicted of second degree murder for stomping to death his employee, Sam Garrett, who owed him $600. Ordinarily being convicted of second degree murder would warrant a life sentence but in a surprising move, the presiding judge reduced the conviction to nonnegligent manslaughter. King served less than four years and was pardoned in 1983 by Ohio Governor Jim Rhodes.

When Charles S. Dutton was 17 he was convicted of manslaughter. He spent seven years in prison. Soon after his release, he was arrested for possession of a deadly weapon, and was sentenced to three more years in prison.

Here’s the best part: During a six-day stint in solitary confinement, Dutton accidentally grabbed an anthology of black playwrights and became immersed in the plays. Upon leaving solitary, he petitioned the warden to start a drama group for the Christmas talent show, which the warden agreed to on the sole condition that Dutton get his GED. He complied. While in prison he completed a two-year college program at Hagerstown Junior College.  Upon his release, Dutton enrolled as a drama major at Towson State University and graduated in 1978. He then went on to earn a master’s degree in acting from the Yale School of Drama in 1983. This is one of those stories about famous people who have gone to prison that has a happy ending–for Dutton and his fans at least, certainly not the crime victim.