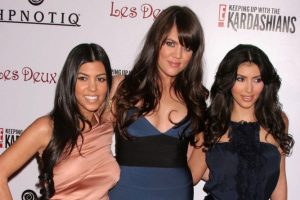 The last few months have been tough ones in terms of the law for the Kardashians and their legal dramas continue as the LA outpost of their clothing store, Dash, was vandalized in the early hours of March 16, 2017. A vandal spray painted the front of the West Hollywood location. He/she (at the time of this writing the suspect has not yet been identified) certainly wanted to get noticed– bright red paint was the color of choice to mar the store front. Dash employees acted quickly and the act of vandalism was promptly cleaned up. The storefront was not significantly damaged (If it were, insurance would have kicked in but then Dash would not be looking quite so lovely quite so quickly as insurance companies are not known for their speedy response time to claims!)

This isn’t the first time, the Dash West Hollywood on Melrose has had issues with vandals. Last June a man threw a molotov cocktail into the store’s window. Luckily, the shop was closed at the time so no one was injured. The fiery “bomb” did shatter the store window but not much else was damaged. That’s good news because a sweatshirt at Dash will set a shopper back a cool hundred (though again, insurance would kick in to cover damaged merchandise).

Dash’s original store in Calabasas (the SoCal town where the Kardashians live) was the target of a spray paint “event” back in 2009 and though the message was sweet, it’s still vandalism–a fan tagged, “We love you Kim,” on the store’s window. It happened another time at the Calabasas location and also at the Miami store.

Dash doesn’t  seem to be having much luck, despite the enormous fame of the owners. The Kardashian sisters closed the Dash NYC location this past December (which, by the way, we at PROOF have been in several times and really liked!) and the Las Vegas location has been shuttered for more than two years. We know most things these sisters touch turns to gold but maybe retail just isn’t for them?