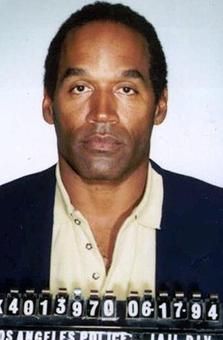 The Case We Can’t Stop Talking About: The People V. O.J. Simpson

Most of us know that before he became an accused murderer, O.J. Simpson was a record-breaking NFL running back.  After retiring from the game, he remained in the spotlight providing sports commentary, appearing in movies, or endorsing products. Who can forget the Hertz commercial of him running through the airport?

The Bronco and the Highway Chase

Perhaps one of the most bizarre aspects of the OJ murder arrest was on June 12, 1994 when every major TV station interrupted their broadcast to show a live shot of a slow car chase. This wasn’t just another LA mad gunman story: it was OJ Simpson allegedly fleeing a murder scene in a white Ford Bronco while his friend, Al Cowlings, was driving at or below the speed limit. Domino’s pizza reported one of the best days ever, with a record number of deliveries.  The police found nearly $9,000 in cash, a fake mustache and goatee, makeup adhesive, a gun, and, Simpson’s passport in the Bronco. Very odd. Was Simpson going to escape the country in disguise, but somehow use his own passport. And the gun? What was that for?  Simpson claimed he wasn’t running from anyone but I don’t know about you but when I’m driving with a friend in my car, I’m the one behind the wheel and he’s sitting next to me. I’m not in the back with fake hair, a pile of cash, and a gun.

The Murders of Nicole Brown and Ron Goldman

Meanwhile, back at OJ’s Brentwood, CA (a toney LA neighborhood) home his ex-wife, Nicole Brown, and her friend, Ron Goldman, were lying outside, dead allegedly killed by a single knife by a lone killer. The crime scene was littered with evidence: a bloody glove, a knit cap, and a trail of blood.

The Trial of the Century

Simpson was charged with the double murder. He plead not guilty despite the substantial amount of physical and circumstantial evidence, including DNA analysis as well as witness testimony against him. His legal team led by the late Johnnie Cochran, included Robert Kardashian, the father of Kim, Khloe and Kourtney (this was way before Kardashian became a household name). People were riveted by this case, it was all anyone was talking about. In fact, more than 100 million people tuned in to hear the jury’s Not Guilty verdict. As we all can remember: the glove did not fit so the jury acquitted.

Not surprisingly, after the criminal case, the families of the deceased sued Simpson for wrongful death suit. The burden of proof in a civil suit is much lower than the beyond a reasonable doubt required in criminal case. This time the families were victorious.  The civil jury found OJ liable for Brown and Goldman’s death and was ordered to pay more than$30 million in damages to the Brown and Goldman families.

That should have been the end of OJ’s legal troubles, right?  But, it was not. He was arrested in 2007  for an incident in Las Vegas involving a hotel room robbery. He was charged with using a deadly weapon to commit burglary and armed robbery, and kidnapping. Simpson was sentenced to 33 years; he is eligible for parole in October 2017.

Never one to shy from the spotlight, Simpson wrote a book titled, “If I Did It: Here’s How it Happened.” Actually, a ghost writer who authored it, but Simpson offered details of how and why he would have killed Brown and Goldman, if he had done it. Another odd aspect of this very odd tale. In 2007 a judge ordered rights to the book to the Goldman family. They published it and changed the title to: If I Did It: Confessions of  a Killer. The proceeds from the book would go to the Goldman family as partial payment of the civil judgment (OJ had filed for bankruptcy) as well as other creditors, including the Brown family.

Dozens of OJ Simpson murder trial related books have come out over the years. Pretty much anyone involved with the trial or Simpson wrote a book: jury members, lawyers, Simpson’s friends, even an ex-girlfriend of his.

America’s fascination with OJ Simpson and the murders of Nicole Brown and Ron Goldman continued and in early 2016, cable network, FX, presented season one of the true crime anthology TV series American Crime Story, and featured the The People v. O.J. Simpson. Critics loved it and the show won big at major award shows including the SAG awards, Emmys, and the Golden Globes.